If you’re into gaming on YouTube or Twitch, you may have probably heard the name, Markiplier. If not, no worries, we’ll start from the beginning.

Mark Edward Fishbach, a 29-year old Hawaii native, is known by the name Markipiler on YouTube. He is a gamer and video game commentator specializing in “Let’s play” videos.

In 2012, life took a drastic turn for Fishbach. He was once an aspiring Biomedical engineer. He created his YouTube channel and dropped out of the University of Cincinnati to pursue his career as a YouTuber.

As far as the numbers go, Markiplier has 25 million subscribers and 12 billion video views on YouTube. These stats make him one among the highest-paid YouTubers. His net worth as of 2019, is estimated at around 28 million USD.

In 2018, Markiplier earned 17.5 million USD, which made him the sixth highest-paid YouTuber that year. However, in 2019, his earning was around 14 million USD.

There are different speculations about his total earning from YouTube. In this article, we dig into the details of his YouTube channel and all other extra earnings too. Keep reading to know more. 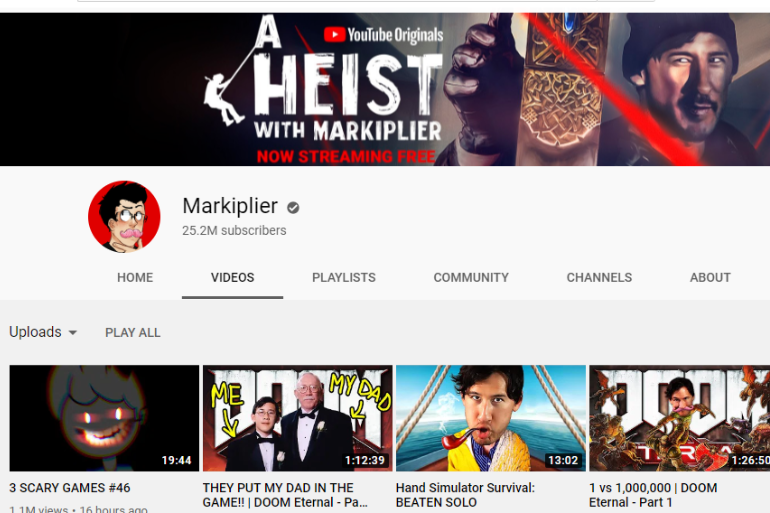 Markiplier officially began his YouTube career in May of 2012. While starting, he bought a camera with a tax refund to start filming videos back in 2012.

Today, he’s channel is among the Top 100 most subscribed channels on YouTube. He earns between 10-18 million USD every year from his various social media endeavors.

According to SocialBlade, this YouTube star has an estimated yearly earning of USD 481.1K – 7.7M from YouTube alone.

If we look at Markiplier’s profile, he has a subscriber base of 25 million (as of February 2020). His average monthly views are around 160 million. Now, on average, a YouTuber gets paid 2 USD for every thousand views on their video. For popular YouTubers, this number is estimated to be around 5-10 USD.

Keeping that in mind, let’s take an average of 7.5 USD per thousand views. With that, Markiplier’s total earning amounts to something around USD 1.2 million.

Over a year, that amounts to a whopping sum of 14 million USD just from YouTube. Remember, this number might be slightly off by a few thousand. But it gives you a reasonable estimate.

Besides YouTube, Markiplier has other sources of income too. He owns an online store where he sells all types of merchandise. From hoodies, socks, caps to dog collars, you will find them on his official website.

In 2018, he, along with a fellow YouTuber, Jacksepticeye, launched their high-end athleisure line called Cloak. He is the one who advertisers look for while looking to reach out to the gaming community. He is often seen promoting brands like Samsung, Illusive wears, and more.

He has an astounding  7.2 million followers on Instagram. Fishbach could easily be earning another 14000 USD- 24000 USD from that platform too.

While the exact figures are unclear on how much he earns from his merch, the numbers may be an estimated few thousand dollars a week.

One great thing about having a large enough following on YouTube is that you can get lucrative sponsorships. Sponsorships help YouTubers capitalize on their online stardom. Though YouTube pays content creators to advertise on their videos, in recent times, YouTube has been stringent on monetization.

So, direct partnerships are what YouTubers look for as they earn the most from these deals. On average, well-known YouTubers like Markiplier can receive $10,000-$50,000 per video for sponsorships.

Though all the videos may not be sponsored, just a dozen of sponsored videos over a year can generate a lot of revenue.

Looking back at the decision to drop out of college to pursue a career as a YouTuber, Markpiler must be proud of himself. He’s managed to build a brand for his name and make millions.

There are thousands if not millions of YouTubers out there. Not everyone makes it big like Markiplier. However, his story can be of inspiration for a lot of new YouTubers. People often forget the hard work that goes in to build such a popular brand. If you want to pursue a career as a Youtuber, work hard as Markiplier, and money will find you.